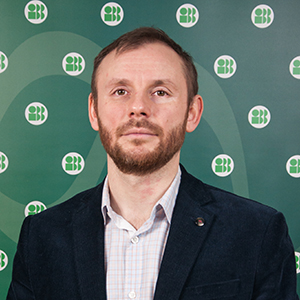 RNA polymerase (Pol) III synthesizes several small noncoding RNAs, including transfer RNA (tRNA). We are interested in studying mechanisms of Pol III regulation during innate immune responses in both immune and non-immune cells. We also seek to elucidate the ways in which the modulation of Pol III activity affects innate immune responses and whether this enzyme could be a therapeutic target to treat immune diseases and cancer.

In all eukaryotes that have been examined to date, RNA polymerase III (Pol III) synthesizes several essential components of protein biosynthetic machinery, including tRNA, 5S ribosomal RNA (rRNA), 7SL RNA, and a subset of small noncoding RNAs that are required for the maturation of other RNA molecules (U6 RNA). These untranslated RNAs are essential for cell growth and proliferation. To maintain cell size, cell growth, and the accumulation of mass, de novo translation is required with each cell cycle. Consequently, cell proliferation is proportional to protein synthesis in almost all cell types. Thus, highly proliferating cells, such as cancer cells, greatly depend on translational machinery and thus Pol III. The rate of Pol III transcription is tightly regulated in response to changing conditions. Notably, the dysregulation of Pol III transcription has been implicated in various human diseases, including immune diseases, cardiovascular disorders, and cancer. The research scope of our laboratory encompasses the role of Pol III in innate immune responses and cancer.

In mammalian cells, Pol III transcription is directly activated by c-Myc, mammalian/mechanist target of rapamycin complex, extracellular signal-regulated kinase, and nuclear factor kB (NF-kB) and repressed by RB, p53, and MAF1. The indirect regulation of Pol III activity involves mitogen-activated protein kinase pathways, mainly through the modulation of Pol III transcription factor subunit levels. Using macrophages phagocytic cells of the innate immune system), we showed that Pol III activity is upregulated during lipopolysaccharide treatment, which mimics bacterial infection. We also showed that the regulation of Pol III under these conditions involves MAF1, a general regulator of this enzyme, and NF-kB, a key transcription factor that mediates inflammatory signals. Interestingly, our data show that the modulation of Pol III activity in macrophages affects their response to proinflammatory stimuli, thus suggesting that Pol III is a potential target to modulate immune responses. This is of great interest because macrophages often contribute to pathological states, such as inflammatory bowel disease, neurodegeneration, arthritis, fibrosis, obesity, diabetes, and macrophage activation syndrome. Furthermore, accumulating evidence indicates that macrophages that are present in tumors (i.e., called tumor-associated macrophages [TAMs]), instead of being effective in host-defense, actually contribute to cancer progression by stimulating cancer cell proliferation, angiogenesis, metastasis, and the suppression of adaptive immunity.

Another aspect of our research links Pol III to colorectal cancer (CRC), the third most commonly diagnosed cancer and fourth leading cause of cancer deaths worldwide. It is very heterogeneous molecularly, and a wide range of causative genetic aberrations have been identified, including mutations, the loss of heterozygosity, and epigenetic changes. Molecular events that underlie the initiation and progression of CRC are still being discovered. Because of the high incidence of CRC, there is an urgent need to fully uncover the mechanisms that cause disease progression and discover new drug targets to treat this malignancy. Interestingly, our data show that the modulation of Pol III activity affects CRC cell proliferation and migration in vitro. We are also currently studying whether this is also the case in vivo. We are especially interested in investigating whether the modulation of Pol III activity affects metastasis, a process by which cancer cells spread throughout the body and colonize other organs. We are searching for links between Pol III and innate immune circuits in cancer cells because these are frequently misregulated in tumors.

In summary, our research links very important areas of biology: Pol III regulation, immune cell function, and cancer. Our long-term goals consist of fully deciphering the role of Pol III in innate immune responses and cancer. We seek to reveal the mechanisms by which Pol III impacts proinflammatory responses of macrophages and impacts innate immune signaling in cancer. Finally, we are seeking to determine whether Pol III may be a therapeutic target to treat immune diseases and cancer.

Our work is supported by POIR.04.04.00-00-3FD3/17 grant within the First TEAM programme of the Foundation for Polish Science co-financed by the European Union under the European Regional Development Fund.

To achieve our scientific goals, we use a combination of biochemical, bioinformatic, and genetic tools. We are also steadily developing our skills in employing large-scale transcriptomic approaches. Our primary experimental models are in vitro cultured mammalian cells. We have extensive experience in working with mouse primary bone marrow-derived macrophages, human peripheral blood-derived macrophages, and cancer cell lines. In our laboratory, we have successfully applied several techniques for mammalian cell manipulation (e.g., transfection, gene silencing using siRNA/shRNA, retroviral/lentiviral transduction, and CRISPR/Cas9 technology). We routinely use standard modern molecular biology techniques, such as Western blot, quantitative real-time polymerase chain reaction, Northern blot, enzyme-linked immunosorbent assays, chromatin immunoprecipitation, and fluorescent microscopy. Moreover, thanks to our recently purchased IncuCyte S3 Live-Cell Analysis System, we are able to conduct experiments in which we monitor several parameters of cultured cells (e.g., proliferation, cell death, and migration, among many others) in real-time (from hours to days). Thus, we are able to test cellular responses to various drugs, treatments, and conditions. Thanks to broadening our network of collaborators, some of our experiments are being performed in vivo in mice.