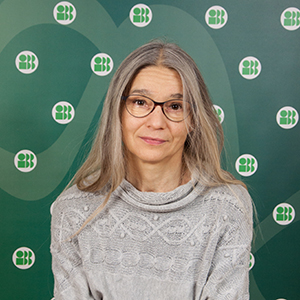 The main focus of our research is comparative and evolutionary genomics. We investigate microbial consortia from natural and experimental environments and explore the history and evolution of apoptotic machinery and trace genomic alterations across fungal branches. We search for novel antibacterial therapies based on the inhibition of ε-ζ TA protein-protein interactions. We also search for possible links between plant miRNA and human health.

Our research focuses on the structure and biodiversity of naturally occurring biofilms and selected microbial consortia. Using 16S rDNA amplicon sequencing, we showed the extremely high microbial diversity of rock biofilm from the Złoty Stok mine, and the biofilm greatly contributes to the arsenic pollution of surrounding water.

Comparative analysis of the biodiversity in biofilms and granules that formed in continuous flow cultures that were grown on molasses indicated that lactic acid bacteria was responsible for effective hydrogen production. The laboratory-scale two-stage system of efficient hydrogen production and subsequently methane was developed by the A. Sikora team at IBB. Metagenomic analysis of the methane-yielding community revealed the hydrogenotrophic pathway of methane synthesis realized in syntrophy between abundant Methanomicrobiales methanogens and bacterium-oxidizing products of molasses fermentation. The system was converted to a large laboratory-scale and semi-industrial installation. As a part of the consortium that conducts the NCBiR project BIOSTRATEG, we investigate metagenomes, metatranscriptomes, and metaproteomes of the prototype installation and sugar factory wastewater treatment plant. Integrated bioinformatic analyses of meta-omic approach results allow us to explore in detail metabolic processes in these complex microbiomes.

Our group analyzes metagenomes and the biodiversity of other unique environments, including post-mining and agricultural soils or historical silk textiles and selected microorganism genomes. We participated in several genome annotation projects of both fungi and insects. However, our main interest is in pathogenic and basal fungal lineages.

In cooperation with Prof. S. Kaczanowski, we are exploring the history and evolution of apoptotic machinery. In animals, apoptotic cell death regulates development. It is involved in cancer suppression and causes cell death during the pathological aging of neuronal cells. Mitochondrial apoptotic-like cell death also occurs in unicellular organisms. We performed ancestral state reconstruction through phylogenetic analysis of the genomic data and found that protomitochondrial apoptosis contained both caspases and meta-caspases, four types of apoptosis induction factors, fungal and animal mitochondrial serine  proteases, and various DNases. Indications of an ancient evolutionary arms race between protomitochondria and host cells led to the establishment of the currently existing apoptotic pathways. This led to the prediction that in extant unicellular eukaryotes, apoptotic factors are involved in mitochondrial respiration, and their activity is needed exclusively under aerobic conditions. We tested this prediction experimentally using yeast and found that loss of the main apoptotic factors is beneficial under anaerobic conditions but deleterious under aerobic conditions.

In the coming years, we will explore the evolutionary origin of eukaryotic programmed cell death and the mechanism of aging using both ancestral state reconstruction and experimental testing of the effects of yeast apoptotic factor replacement by bacterial and other eukaryotic orthologs.

We also study the mechanisms of gene evolution by examining the results of experimental “in the lab” yeast evolution. We explore whether the genetic interaction network impacts the evolution of functional modules. We performed short-term laboratory evolution experiments by subjecting yeast deletion mutant strains that lacked COG7 and NUP133 (i.e., evolutionarily conserved genes with many interactions) to continuous culture in chemostat. The evolved strains were characterized by whole-genome sequencing and transcriptome analyses. No obvious compensatory changes that resulted from the inactivation of genes that are already included in the modules were identified. The results indicated that the genetic interaction network and modular structure of cellular machinery have a limited impact on evolution.

For many years, we studied bacterial toxin-antitoxin (TA) systems. Their activation causes growth inhibition or cell death and contributes to effective plasmid inheritance. We focused on the ω-ε-ζ system of the pSM19035 plasmid from the clinical Streptococcus pyogenes strain. Members of the ε-ζ TA family have been found on resistance plasmids in major human pathogens. We showed that the ω-ε-ζ operon constitutes a novel system in which the ε gene encodes an antitoxin and ζ toxin. We functionally characterized the ε-ζ system and demonstrated that ζ  toxin is bactericidal for G(+) bacteria, bacteriostatic for G(-) bacteria, and toxic for yeast. We showed an in vivo interaction between ε and ζ. We showed that the ε antitoxin is degraded by ClpXP protease and characterized the efficiency of the ω-ε-ζ cassette in pathogenic bacteria.

Toxin-antitoxin systems are considered potential candidates for the development of targeted antibacterial drugs. The knowledge that is gathered from the ε-ζ system allowed us to develop a sensitive fluorescence polarization assay that evaluates the effectiveness of protein-protein interaction (PPI) inhibition. Peptide ligands were designed on the basis of the ε2ζ2 complex and synthesized with an N-terminal fluorescein, providing active ligands of the ε-ζ complex. This test is currently used to search for molecules that may be useful for the development of therapies against strains that carry antibiotic resistance plasmids.

We also investigate possible links between plant miRNA and human health. Recently, the possibility of cross-kingdom gene expression regulation by miRNAs from other species (“xenomiRs”), specifically from plants, has acquired scientific meaning. Following bioinformatic analyses, we evaluated by real-time polymerase chain reaction the presence of five food-derived miRNAs in human breast milk. We confirmed that one of these plant miRNAs is able to modulate the expression of human FAN (Factor Associated with Neutral Sphingomyelinase Activation) protein in eukaryotic cells. Currently, we are testing its activity on the inflammation process. This subject will be developed more in the coming years.