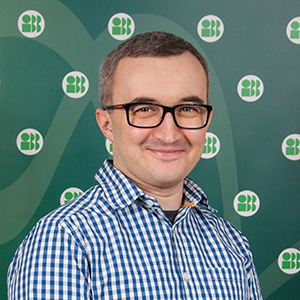 Our laboratory is interested in mechanisms that control the quality, quantity, and processing of RNAs that originate from expression of the mitochondrial and nuclear genomes in humans. Our main goal is to decipher molecular machinery that is responsible for RNA surveillance. We also investigate mechanisms that maintain and regulate expression of the mitochondrial genome and the ways in which they respond and adapt the cell to different stress conditions.

Mitochondria are unique organelles in human cells because their function depends on crosstalk between two genomes: nuclear and mitochondrial. Human mitochondrial DNA (mtDNA) contains only a few genes, but all of them are essential. mtDNA exists in multiple copies per cell, and the expression of mitochondrial genes can be regulated by controlling the gene copy number.

Although the human mitochondrial genome was one of the first to be sequenced, the way it functions is still not entirely understood. Our studies focus on unraveling mitochondrial gene expression mechanisms. To date, we have been mainly interested in post-transcriptional mechanisms, but our ongoing and future studies concern the mechanisms that regulate mitochondrial gene copy number. We also intend to investigate the processing of individual mitochondrial transcripts and the ways in which mitochondrial nucleic acid metabolism responds to stresses (e.g., viral infection). We also plan to explore the recent discovery that mtDNA expression leads to the formation of double-stranded RNA.

The regulation of human mitochondrial gene expression at the initiation of mtDNA transcription appears to be limited. Thus, post-transcriptional processes, including RNA decay, are critical for shaping the mitochondrial transcriptome. We contributed significantly to the identification of an RNA-degrading complex in human mitochondria (1). This complex—the mitochondrial degradosome—consists of RNA helicase SUV3 and the ribonuclease PNPase. We showed that the degradosome is essential for the surveillance and decay of human mtRNAs, particularly antisense transcripts (1). Our recent studies revealed that short mtRNAs that are generated by mtRNA processing and decay machinery are removed by REXO2 oligoribonuclease, proving that REXO2 controls short mtRNAs (2).

RNA molecules can form different structures, many of which involve non-canonical base pairing, such as the case of G-quadruplexes (G4s). Mitochondrial genomes of vertebrates exhibit extraordinary GC skews (i.e., high guanine content on one strand). Therefore, the transcription of human mtDNA results in the synthesis of G-rich RNAs that are prone to form G4s. Such mtRNAs, mostly antisense RNAs, are transcribed at high rates, but their steady-state levels are extremely low. We described a mechanism by which G4-containing antisense mtRNAs are efficiently degraded in humans (3, 4). We showed that the RNA-binding protein GRSF1 melts G4s in mtRNAs, facilitating degradosome-mediated decay. Based on phylogenetic analyses, we proposed that GRSF1 appears in mitochondria when genomes undergo a G4-poor to G4-rich transition. This evolutionary adaptation enabled the control of G4 mtRNA levels.

The importance of degradosome-dependent mtRNA surveillance was underscored by our studies that were performed in collaboration with the Proudfoot laboratory (Oxford University, UK) and others, showing that SUV3 and PNPase are major regulators of mitochondrial dsRNA (mt-dsRNA) (5). We revealed that mtDNA transcription is a significant source of dsRNA in humans. We showed that the depletion of SUV3 or PNPase leads to the accumulation of mt-dsRNA, and in the case of PNPase, to the release of these species into the cytosol. Remarkably, once in the cytosol, mt-dsRNA triggers an innate immune response through induction of the interferon pathway (5). Our work identified a new mechanism by which mitochondria contribute to cell fate and human health. Currently, we are investigating the role of other proteins in the regulation of mt-dsRNA levels.

The maintenance of mitochondrial gene expression is crucial for cell homeostasis. Stress conditions may lead to a temporary reduction of mtDNA copy number, raising the risk of the insufficient expression of mtDNA-encoded genes. We applied a quantitative proteomic screen to search for proteins that sustain mtDNA expression under stress conditions. We found that the novel mtRNA-binding protein MTRES1 is elevated in cells with perturbances in mtDNA expression. Our study showed that MTRES1 prevented mtRNA depletion during transcription arrest (6).

Transcription of the nuclear genome has the potential to produce long dsRNA species. However, under normal conditions, such RNAs are hardly detectable, suggesting their tight control. To identify proteins that are involved in this regulation, we performed a loss-of-function screen. This screen indicated a pathway, the inhibition of which led to the upregulation of nuclear dsRNA. The molecular mechanism that underlies dsRNA accumulation is the subject of our ongoing studies.