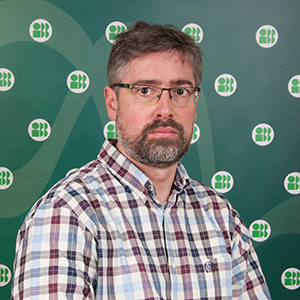 Our research seeks to understand the mechanisms that are responsible for the synthesis of developmentally regulated non-coding RNAs and their role in programmed genome rearrangements. The key question that we seek to answer is whether ncRNA synthesis and metabolism in eukaryotes require a specific composition of transcription machinery and modification and transport pathways.

Nearly all kinds of genomic regions in eukaryotes have been reported to have some transcriptional activity and give rise to various non-coding RNAs (ncRNAs). Most ncRNA production has been attributed to RNA polymerase II, although miRNAs are also produced by RNA polymerase III. In plants, the specialized RNA polymerases IV and V synthesize siRNAs and non-coding nascent RNAs, respectively. One important question in the field is whether ncRNA synthesis requires a particular composition of transcriptional machinery. To address this issue, we use the ciliate Paramecium tetraurelia, a model unicellular organism in which different types of ncRNAs are implicated in the regulation of developmental genome rearrangements. At each sexual cycle during development of the somatic nucleus (macronucleus [MAC]) from the germline nucleus (micronucleus [MIC]), the Paramecium genome is massively rearranged through the reproducible elimination of germline-specific sequences, including multi-copy transposons and thousands of short, single-copy, non-coding internal eliminated sequences (IESs) (1). Increasing evidence indicates the generality of developmentally controlled DNA elimination in multicellular organisms (2). Open questions include how particular germline sequences are determined for elimination and which machineries are involved in this process. Because of their unique nuclear dimorphism, ciliates (particularly Paramecium) are ideal model organisms to study the underlying mechanisms.

Rearrangement patterns were previously shown to be maternally inherited between the old and the new MAC. This process involves a global comparison of germline and somatic genomes. According to the current model that is proposed for P. tetraurelia, this trans-nuclear comparison involves specialized RNA interference machinery and is mediated by different types of non-coding RNA molecules, including a special class of developmentally regulated small RNAs from the MIC (scnRNAs) and longer non-coding transcripts that are produced by the maternal MAC and new MAC. The epigenetic control of genome rearrangements in P. tetraurelia by RNA-mediated, homology-dependent mechanisms provides evolutionary insights into the diversity of non-coding RNA pathways that are involved in genome plasticity (3).

Our research involves in-depth studies of factors that are specifically responsible for the epigenetic control of developmentally programmed DNA elimination that is mediated by non-coding transcripts in Paramecium. We focus our studies on characterizing proteins that influence transcription, including families of the TFIIS, Spt5, and Spt4 elongation factors, other components of the RNAPII complex, and other proteins that are involved in RNA metabolism. We are testing the possible role of these proteins in the initiation of genome-wide non-coding transcription.

During the course of our studies, we identified an autogamy-specific essential function of TFIIS4, a putative elongation factor that is involved in the regulation of genome rearrangement and transcription in the new MAC (Maliszewska-Olejniczak et al. 2015). Using high-throughput sequencing, we demonstrated that genome rearrangements that occur during MAC development were inhibited in TFIIS4-depleted cells. Furthermore, we obtained the first evidence of the existence of germline-specific (IES+) transcripts at an early stage of MAC development in control cells. We then proved that TFIIS4 plays an important role in the production of these non-coding IES+ transcripts that are synthesized in the new MAC. Real-time polymerase chain reaction (RT-PCR) data analysis of the tested IESs showed that upon TFIIS4 silencing, practically no transcripts could be detected during the sexual process. We postulate that TFIIS4p may be involved in the transcription of all IESs or even an entire genome, providing an interaction RNA scaffold for small RNAs.

We also discovered two genes that encode Spt5 elongation factors in P. tetraurelia. We showed that Spt5v is constitutively expressed and occupies the MAC, whereas Spt5m expression peaks early in autogamy during meiosis, and the protein is present in the meiotic MIC, zygotic nucleus, and new MAC. Spt5v is essential during vegetative growth and most likely is responsible for mRNA synthesis, whereas Spt5m is necessary for the survival of sexual progeny. Spt5m is responsible for correct genome rearrangements, and its depletion leads to a dramatic reduction of development-specific non-coding small RNAs (scnRNAs) and iesRNAs (Gruchota et al. 2017).

The experimental approaches that are used in our laboratory range from molecular genetics to genomics, proteomics, and cell imaging techniques. Our model organism, Paramecium tetraurelia, is a free-living unicellular eukaryote that feeds on bacteria and can easily be cultured. It is well suited for genetic studies because it has two alternative modes of sexual reproduction, conjugation and autogamy, that can be induced under laboratory conditions. We routinely use the “RNAi by feeding” technique to silence the expression of one, two, or even three genes in parallel. We perform genome-wide analyses of genome rearrangement using the high-throughput sequencing of DNA from purified developing new MACs. The deep sequencing of short RNA libraries enables evaluations of the synthesis of scnRNAs and iesRNAs, two classes of ncRNA that are implicated in the regulation of genome rearrangements. We successfully use tagged proteins for the purification of protein complexes that are analyzed using mass spectrometry approaches. The relatively large size of the P. tetraurelia cell (120 μm) and nuclear dimorphism allow microscopic (fluorescence and confocal) studies of dynamic changes in the localization of fluorescently labeled proteins that are active in different nuclear compartments during the course of the sexual cycle.