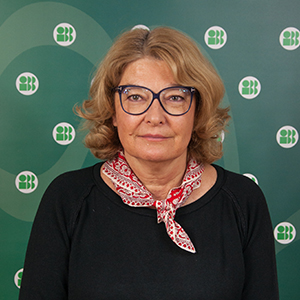 Our laboratory seeks to identify mechanisms and factors that ensure efficient and highly accurate DNA replication and influence genetic stability.

Mechanisms that maintain high-fidelity DNA duplication and repair are critical to handle the malfunction of replication forks and DNA damage. Mutations are essential factors in long-term processes of evolution or the generation of antibody diversity, but in the short term they are deleterious and may cause human disease.

By measuring the level of mutagenesis that occurs on leading and lagging DNA strands, we studied the involvement of particular DNA polymerases in the replication of both DNA strands and the mechanism of DNA polymerase switching1,2. In collaboration with R. Schaaper (NIEHS), we demonstrated that the accuracy of DNA replication is higher on the lagging strand3. This effect results from the more dissociative character of the lagging strand replication, which provides options for the activation of additional mutation-prevention pathways. Our conclusion is supported by results of antimutator polymerases that were characterized by an increase in dissociation rates4.

The E. coli SOS system is well-established as a model of the cellular response to DNA damage. In collaboration with R. Schaaper’s laboratory, we investigated the possible interplay between SOS and cellular dNTP pools. We found that alterations of the dNTP pool that were caused by deficiencies in the nucleoside diphosphate kinase and dCTP deaminase had a suppressive effect on constitutive SOS expression. We proposed a model of how alterations of the dNTP pool may interfere with the mechanism of SOS induction.

According to recent in vitro studies, DNA polymerases misincorporate rNTPs into DNA at a rate of 1 per 103 bp. Hence, ribonucleotides, which are more abundant in cells than dNTPs, vastly outnumber any other type of DNA damage or source of mutations. In collaboration with R. Woodgate (NIH), using steric gate mutants of DNA polymerases, we found that ribonucleotide incorporation and the efficiency of their subsequent removal were not equal on both DNA strands.

The high fidelity of replication depends on polymerase nucleotide selectivity and the associated proof-reading activity of 3’-5’ exonuclease. To understand the molecular basis of base discrimination that is exhibited by replicative DNA polymerases, we studied DNA polymerase from bacteriophage RB69. RB69 polymerase, together with major eukaryotic DNA polymerases, belong to the B family. We conducted structure-function fidelity studies that allowed us to identify important residues that contribute to the high fidelity of this enzyme (Y567, S565)5, and we proposed that remote, non-catalytic residues may be critical for maintaining an optimal active site conformation (D714)6. We are also investigating interactions between the polymerase and primase from the T4 replisome.

Studies of mutations of genes that encode replication complex proteins are important for understanding origins of human diseases. Replisome components are highly conserved in all eukaryotes. Therefore, yeast cells serve as an excellent model system to study their mutual functional dependencies. The central role in the replisome is played by the Cdc45-Mcm2-7-GINS (CMG) helicase complex, which also coordinates the assembly and function of replisome components. CMG associates with and stimulates the activity of DNA polymerase ε (Polε), forming the CMGE complex.

In our investigations, mutated variants of Polε or GINS of the CMGE complex impair genetic stability. We observed mutator phenotypes, defects in cell cycle progression, an increase in the participation of low-fidelity DNA Polζ, and an increase in the instability of repeat tracts7-9. We proposed that the defective function of CMGE impairs the progression of DNA replication, leading to a greater contribution of recombination-based repair mechanisms. These findings corroborate recent reports that defects in CMGE promote the development of certain human diseases.